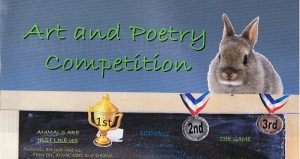 Our Art and poetry competition was a strategy to get secondary school age students to consider animal experiments. The entries received from across Australia confirmed to us that there is very little knowledge about animal research in this age group but it is heartening to see that it is an issue that these students, once aware, have become very passionate about. Some very positive feedback was received including one comment from a teacher in Whyalla who said “The kids have been enjoying the project and it’s an eye opener too!”
The competition was generously sponsored by Kodak and Pure Geisha toiletries which each provided prizes.

A pivotal role of HRA is to raise public awareness of animal experimentation so that future policy can be influenced by public support for alternative non-animal methodologies in research. We were fortunate enough, by way of a small bequest, to produce three 15 second television and radio commercials. These commercials are non-confrontational but relay three key facts:

The adverts were aired as public service announements on Channel 10 and also (in paid slots) on Channel 31 and SBS. We are now looking into other avenues of distribution such as online advertising.

Rats and Beer experiment withdrawn from curriculum at University of Sydney

Since September 2007, following concerns from students, University of Sydney were challenged for the use of rats used in an experiment that involved feeding them Tooheys Old Beer to determine taste preferences. Along with other concerned parties, HRA co-signed letters of protest and a formal complaint to Industry & Investment NSW suggesting that the use of the rats in this experiment was a breach of the code of practice. Whilst the complaint was dismissed, it was confirmed by the university in December 09 that the Toohey’s experiment had been omitted from the course.