Interview on The Kerri Anne Show 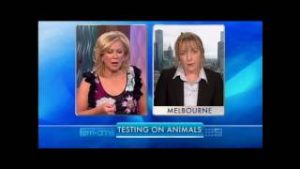 HRA was given the rare opportunity to be interviewed live on The Kerri Anne show to discuss controversial chimpanzee experiments in the United States. Whilst we were very limited by the questions asked and the time allocated, this was a unique opportunity to raise the issue of animal experimentation to a far reaching audience on prime time television which our advertising budget could never allow. The interview can be viewed online.

HRA was also invited to participate in a debate with Laurie Pycroft from Oxford University group ‘Pro-Test’ about the necessity of animal testing in medical research.
The debate is available online.
This publication reaches an international audience so it was a wonderful opportunity to get the truth out there – that animal experiments are both unethical AND scientifically flawed – and also to raise the profile of HRA

Importation of primates for research purposes 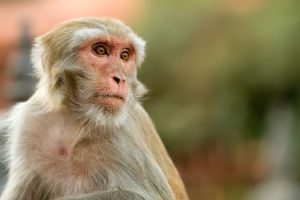 Our current primary campaign is to stop the importation of primates for research purposes.
Australia is currently home to three government-funded primate breeding facilities – the National Marmoset and Macaque Facilities at Churchill, Victoria and the National Baboon Facility in Sydney, all of which breed animals specifically for the purpose of being used in research.
Despite this “ready supply”, macaque monkeys continue to be imported from Indonesia. More detailed information on this campaign can be obtained from our most recent bulletin ‘Monkey Madness’.
The campaign gained momentum when Federal Parliament’s Deputy Speaker, Anna Burke, asked Trade Minister Craig Emerson whether monkeys imported from Indonesia are actually wild-caught – which is in breach of both Australian and Indonesian protocols. The call followed a petition of more than 10,000 signatories calling for a ban which was tabled in Federal Parliament in November by the member for Deakin, Mike Symon MP. (http://www.openaustralia.org/debates/?id=2011-11-23.166.1)