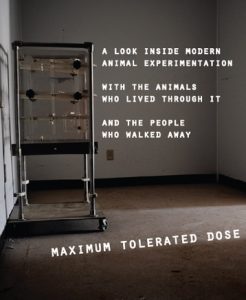 Maximum Tolerated Dose is the first feature-length documentary by Decipher Films. Equal parts found-footage mash-up, verite investigation, and artful meditation, the film charts the lives of both humans and non-humans who have experienced animal testing first-hand.  In February 2013, HRA hosted a visit by director Karol Orzechowski and screenings of the movie in Melbourne, Sydney, Canberra and Brisbane. The screenings were attended by HRA supporters, members of the public and people from within the animal research industry. Director Karol Orzechowski was also interviewed on Weekend Sunrise.

The costs and benefits of animal experiments.

Our Public Opinion Poll, conducted by Nexus Research, was a follow up from our previous poll in 2008. It didn’t reveal any groundbreaking shift in attitudes, but it did show that we are slowly progressing.
What did the poll reveal?

Not a huge paradigm shift, small but positive progress, however, when we consider 6% of the Australian population, that’s equates to 460,000 people who have swayed their views to opposing animal experiments.

Researching and publishing case studies is a major part of our work. We obtain research papers from medical journals, cut through the scientific jargon and translate them into layman’s terms. We do this to demonstrate that the experiments that occur behind lab doors are not some exaggerated claims from yesteryear. They are happening right here and now.
This year we have uncovered: