Have a read through some of our achievements we’ve made during 2017. 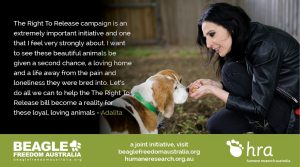 Continuing on with our work with Beagle Freedom Australia rehoming ex-lab animals, the campaign seeking legislation to make rehoming animals mandatory wherever possible, became known as the Right to Release campaign.
Ongoing discussions are being held with state departments, however following several communications with the National Health and Medical Research Council going back to 2015, in June 2017 they rescinded their “Guidelines on the Care of Dogs Used for Scientific Purposes” – a document which stated that “The adoption and rehoming of dogs used for scientific purposes is not endorsed as general good practice…”
The removal of this hurdle was crucial to open up the lines of communication between research facilities and rescue and rehoming centres.
The campaign has been further assisted by singer/songwriter Adalita who starred in our R2R video.

Train adverts – “I am not a lab tool” 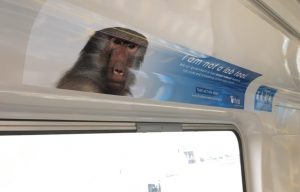 I am not a lab tool is a campaign calling on the Australian governments (both state and federal) to provide funding initiatives for scientists to develop methods of research to replace animals. We launched our petition in June 2017 and the end of the year saw numerous versions of our posters on Melbourne trains.

Use of live animals in surgical trauma training ends 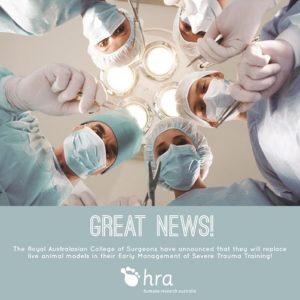 In a letter to HRA, Royal Australasian College of Surgeons (RACS) announced that it will phase out the use of live animals for its Early Management of Severe Trauma (EMST) programme by 2018.

The programme trains physicians and Australian Defence Force (ADF) medical officers on treating traumatic injuries. After looking into advanced human-simulation technology, RACS President Philip Truskett confirmed that EMST participants in RACS courses will no longer use live animals in training. Up until this time, training involved cutting holes into the throats, chests, and limbs of live animals including dogs and pigs. 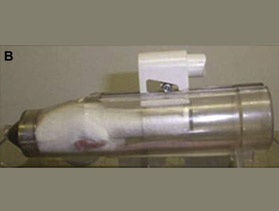 HRA’s expose on an experiment which forced mice to inhale cigarette smoke led to much media interest and forced University of Newcastle to publicly defend their actions.

Whilst there was much public outcry over the cruelty and necessity of this experiment, the university confirmed that the research continues.