Australian regulations relating to animal use in research and teaching

It is widely believed that the animals used in government sanctioned experiments are protected from cruelty and suffering through State or Territory Animal Welfare Acts, the National Medical Health and Research Council (NHMRC)’s Code of Practice for the Care and Use of Animals for Scientific Purposes, and the Animal Ethics Committees associated with each research institution, whose task is to scrutinise every proposed use of an animal in an experiment.

Sadly, however, these mechanisms fail to prevent cruelty and suffering from occurring. They fail because the medical and scientific researchers, and the facilities they work in, are for the most part self-regulated. There is no independent assessment, little transparency, and next to no accountability within the industry.

In fact, the federal government, through the NHMRC, hands out hundreds of millions of dollars every year, yet has no independent assessment procedures in place to review the outcomes of the research it has funded, nor does it take responsibility for ensuring its own code of practice is adhered to by the scientists conducting the experiments. 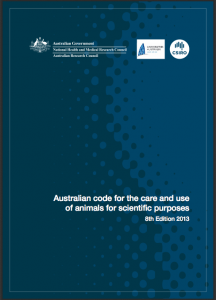 Following is a summary of the principle legislation, regulations, and guidelines that relate to animal use in research and teaching in Australia.

State and Territory legislation specifically relating to the use of animals in research and teaching:

The status of State and Territory guidelines on rehoming laboratory animals can be found here.

All research conducted in Australia that is funded by the National Health and Medical Research Council (NHMRC) must comply with:

and, if the research involves the use of non-human primates:

– The NHMRC Policy on the Care and Use of Non-Human Primates for Scientific Purposes (the Policy), which governs the use of primates in teaching and research.

PLEASE NOTE:
‘The ethical framework and governing principles set out in the Code provide guidance for investigators, teachers, institutions, animal ethics committees and all people involved in the care and use of animals for scientific purposes’. However, compliance with the Code is only formally required if:

(a) the research is funded by the NHMRC. (Compliance with the Code is a prerequisite for receipt of NHMRC funding.)

(b) compliance with the Code has been incorporated into the relevant aforementioned state or territory legislation. (The Code may be adopted in whole or in part, or not at all).

Also see a list of NHMRC guidelines relating to the use of animals in research and teaching here, and the Best Practice Methodology in the use of Animals for Scientific Purposes.

Cosmetics are regulated by the Department of Health (Minister of Health and Ageing),under the authority of the Industrial Chemicals Act 2019, which comes into force on 1 July 2020. The Australian Industrial Chemicals Introduction Scheme (AICIS) will replace NICNAS on 1 July 2020 as the new national regulator of the importation and manufacture of industrial chemicals in Australia.