Many Australians are surprised to learn that cats are being used in highly invasive procedures in Australian laboratories. In fact, recent statistics show that in just one year over 2,780 cats were used in research and teaching across Victoria, New South Wales, and Tasmania.

Details provided in the Victorian statistics indicate that 68 cats were used in the ‘major physiological challenge’ category. Experiments in this category require the animal(s) to remain conscious for some or all of the procedure, and involve interference with the animal’s physiological or psychological processes. The challenge causes a moderate or large degree of pain/distress, which is not quickly or effectively alleviated. Examples include causing major infection; artificially inducing disease without pain alleviation; and isolation or environmental deprivation for extended periods.

With further detailed examination of the statistics, reference to a further 5 cats used in ‘death as endpoint’ experiments is found. The aim of experiments in this category actually requires the animal(s) to die unassisted, i.e. not euthanased, as death is ‘a critical measure of the experimental treatment’.

All over Australia, cats are being used in what is called ‘basic research’ – this is research that is conducted in an attempt to understand basic phenomena, or out of ‘scientific curiosity’, without seeking specific applications of the research, e.g. without measurable human health outcomes, cures, or treatments.

Irrespective of the type of research being conducted, cats are not laboratory tools for researchers to use at their leisure. And yet we continue to see thousands of cats used in experiments in Australia every year.

What kind of experiments are being conducted on cats?

Repeated experiments by the Bionics Institute involving kittens being deafened one day after birth, used in cochlear implant experiments, then killed


These experiments involve kittens undergoing procedures to artificially induce chronic deafness. Injections commence a day after the kittens are born and continue until the kittens register as profoundly deaf. Cochlear implants are then inserted while cats are anaesthetised and placed in a restrictive stereotaxic frame. The cats later undergo invasive brain surgery, where a section of their brain is removed to expose the auditory cortex. The implant electrodes are then stimulated with an electrical current. At the conclusion of the experiment the cats are killed.

Between 2007 and 2016, at least 10 experiments of this sort have been conducted by the Bionics Institute in conjunction with the University of Melbourne. The researchers involved in these experiments have collectively received over $2.4 million for these experiments.

“As a veterinary surgeon for 30 years I challenge the researchers responsible for [these studies] to provide one shred of evidence that these cat experiments are predictive of what happens in people with hearing problems. The fact that these researchers make the claims they do in their published work indicates that they need to undergo a basic course in evolutionary biology.”

Our ‘poster boy’ Leo was rescued from a laboratory where he was used in an experiment attempting to investigate surgical techniques for vision correction in humans. 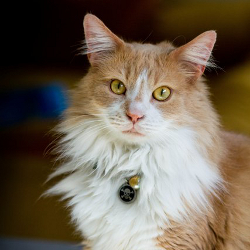 Are experiments on cats reliable for medical research?

There are major anatomical, genetic, dietetic, environmental, toxic, and immune differences between animals – including cats – and humans1, making them inappropriate for use in studying human disease. Many studies and systematic reviews show that there is discordance between animal and human studies, and that animal ‘models’ fail to mimic clinical disease adequately.2,3

Given this, one must seriously question why the Australian researchers engaged in these experiments spend valuable time and resources using cats, rather than investing in advanced human biology-based methods of research, in order for results to be directly relevant to human health outcomes.

It is now time to end the use of cats in research laboratories and instead, focus on research that is human-relevant.