Reperfusion – the action of restoring the flow of blood to an organ or tissue, typically after a heart attack or stroke

Cerebral ischemia – insufficient amount of blood flow to the brain. … This type of brain tissue death is also known as a cerebral infarction or ischemic stroke

The intraluminal monofilament model of middle cerebral artery occlusion (MCAO) involves the insertion of a surgical filament into the external carotid artery and threading it forward into the internal carotid artery (ICA) until the tip occludes the origin of the MCA, resulting in a cessation of blood flow and subsequent brain infarction in the MCA territory

To study whether prior exposure to cigarette smoke worsens brain injury and stroke outcomes.

147 male mice were obtained from the Animal Resource Centre, Perth, WA.  112 mice were used due to complications prior.

Mice were placed in 18 litre plastic chambers purchased from The Plastic Man store, Huntingdale, Melbourne and fitted with a chemical hood used to generate 9 cigarettes per day 5 days per week for periods of 2 weeks (acute exposure) 8 weeks (sub-chronic exposure) and 12 weeks (chronic exposure).

Researchers state “These exposure protocols provide a robust clinically-relevant platform to explore mechanisms that are relevant to cigarette smoke-induced COPD and its co-morbidities”.

The mice were then monitored for 8 hours for signs of severity. They were killed 24 hours post-surgery.

Prior to death. Neurological assessments were carried out by suspending mice by their forelimbs from a wire 30cm above a padded surface for up to 1 minute for 3 times with 5 minutes rest in-between. 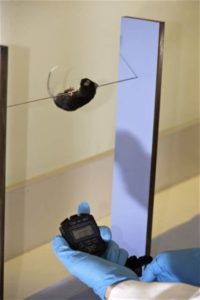 The experimental group of mice were restrained in the smoking chambers where they inhaled cigarette smoke, which would have adverse welfare implications.

In total, 35 mice were excluded from the study which occurred when, during the surgical procedure: (1) there was an inadequate reduction (<70%) in regional cerebral blood flow (rCBF) during the ischemic period or inadequate (>80%) increase within the first 10 minutes of reperfusion (n = 23); (2) technical or anaesthesia complications arose during surgery (n = 3); (3) they died prior to the end of the reperfusion period (n = 7); or (4) they had to be humanely killed due to severity of adverse effects of stroke (n = 2).

There is no detail provided on the post-surgery pain management regime. Furthermore, discomfort post-procedure could theoretically confound any meaningful results of the study.

The highest impact experiment had 24% bungle rate (35/147 ‘had to be excluded. The surgical technique was not ‘successful’. This itself is a breach of lab practice and should have led to a pause in the study, until taken back to the ethics committee and the researcher to explain.

The mice were exposed to cigarette 5 days a week but not on the weekends. This would not reflect human routine smoking.

The researchers noted differences in previous studies between a different species of mouse namely the BALB/c mouse strain to the strain that they had used, the C57BL/6, noting that it is more resistant to acute cs-induced lung inflammation to the BALB/C mouse strain.  Yet the authors were ‘surprised that the mice did not show same outcomes as humans had shown’ (eg mortality, length of hospital stay, ICU). With differences between different strains of mice even, different outcomes may be expected between mice and humans. It should also be noted that COPD people are middle aged to old. The mice were healthy at start and 7 weeks old.

The experiment does not reproduce human COPD and its concomitant comorbidities – chronic vascular dysfunction, coronary artery disease, carotid artery disease with progressive worsening even if not to total occlusion.

Laboratory animals cannot reflect human smoking because they breathe through their noses, and their inflammatory responses differ from those in humans. In addition, human clinical studies have revealed great variability in the physiological and biochemical responses between patients, and they usually do not allow direct comparisons of smoke exposure versus no exposure in the same individual.

Over $1 million was granted for this research.

With results that are unreliable due to inter-animal variations and poor research design, the research does not yield reliable results for humans. Stroke severity outcome at 24 hours in humans (when mice were killed), is not as relevant as outcome after the period of healing 6 months to years. The conclusion- ‘it is possible that COPD may not impact on stroke severity but may just increase the risk of stroke‘ is already known in the medical world.

This research could be replaced by human epidemiology.  For an example of non animal research in the field please see our case study How e-cigarettes impact airway cells.

Please use the form below to tell the Animal Care and Ethics Committee at RMIT, how shocked you are that they approve such inhumane experiments. You can use the text provided or compose your own.

Your message will be sent via email to The Manager, Research Ethics and Integrity.