In an attempt at evaluating the feasibility and safety of implanting stimulating and recording electrodes in the brain of normal dogs (as the first step in conducting deep brain stimulation (DBS) for the treatment of epilepsy), four healthy greyhounds, between 1 and 4 years old, were used in an experiment by the University of Melbourne. 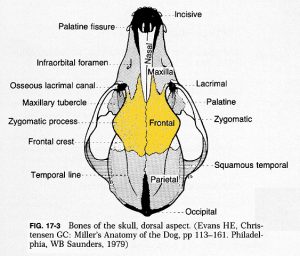 First, the dogs were anaesthetised for magnetic resonance imaging (MRI). After anaesthesia was induced, an 8cm-long incision was made over the frontal bone of the skull (see image to the right), and a fiducial array was attached using ceramic screws.

MRI imaging sequences were then conducted, with the resulting image data used to calculate trajectories for the placement of unilateral thalamic DBS leads and hippocampal recording electrodes into the skull.

After imaging, the base plate of the fiducial array was left in place, and the skin where the incision was made was sutured (over the frontal bone). The dogs were then left to recover until the day of surgery.

Animals were anaesthetised before the fiducial array baseplate was exposed and the ‘Brainsight‘ frame applied. The skull on the left side of the dogs was then exposed, and the entry holes for insertion of both DBS leads were planned and marked.

After calculating skull thickness, 15mm holes were drilled in the skullcap. The membranes covering the brain were then pierced, and a DBS lead, a recording lead, and four electrodes were advanced into the holes through a cannula. Leads were then secured to the skull using bone cement and ceramic screws.

After surgery, the dogs were imaged by CT scan before recovery. The dogs were then given some pain relief and antibiotics during recovery. Neurologic examinations were performed on each dog once daily for the first 7 days, then weekly for the next 4 weeks.

Seven days after surgery, the stimulating device was tested to determine the electrodes of each lead that gave the best evoked response. Electrical stimulation was then performed. The dogs first underwent stimulation for 7 days before they were treated with levetiracetamo (an anticonvulsant epilepsy medication) at 20 mg/kg for 7 days while DBS continued, followed by 40 mg/kg for 7 days (low and high dosage).

The authors of the study state that ‘some discomfort was noted for up to 5 days after surgery’, which suggests post-surgical pain management may have not been sufficient.

In one dog, ‘excessive movement during the recovery period resulted in the formation of a large subcutaneous hematoma on the dorsal midline over the stimulation device’, i.e. ‘a solid swelling of clotted blood within the tissues’.

The authors of the study do not provide any details on the final fate of the four greyhounds (i.e. whether they were killed, which is common at the conclusion of experiments such as this one).

The experiment was supported by a grant from Medtronic Inc.