Humane Research Australia considers the use of human cell and tissue culture to be, clearly, a more ethical and scientifically-valid mode of research than using animals. Unfortunately though, even when using these “in-vitro” methods, a component of animal cruelty can possibly still remain.

Human cells and tissue are grown in a culture form and in order for the cells or tissue to grow and proliferate, a source of nutrients, namely hormones and growth factors must be added. The usual supplement is fetal calf serum – also known as fetal bovine serum – a product that is cruelly derived from the fetuses of cows found pregnant at slaughter. Serum is blood without any cells, platelets or clotting factors and fetal calf serum especially, is considered to be a rich source of nutrients.

It has been estimated that around half a million litres of raw FCS is produced each year worldwide which equates to the harvesting of more than one million bovine fetuses annually. (1) Some sources have suggested that the actual figure may be closer to two million fetuses per year. (2) 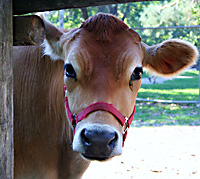 After slaughter and bleeding of the cow at an abattoir, the mother’s uterus containing the calf fetus is removed during the evisceration process (removal of the mother’s internal organs) and transferred to the blood collection room. (3). A needle is then inserted between the fetus’s ribs directly into its heart and the blood is vacuumed into a sterile collection bag. This process is aimed at minimizing the risk of contamination of the serum with micro-organisms from the fetus and its environment. Only fetuses over the age of three months are used otherwise the heart is considered too small to puncture. (4)

Once collected, the blood is allowed to clot at room temperature and the serum separated through a process known as refrigerated centrifugation.

It remains questionable as to whether or not fetuses have already died from anoxia (deprivation of oxygen) prior to serum collection. Nevertheless, no anesthesia is given, despite their possible ability to experience pain and discomfort.

While of course we don’t advocate cruelty to any living being, there are also many compelling scientific reasons why Fetal Calf Serum should no longer be used in research. Here are a few strong arguments:

Rather than just criticising a process of research that uses animals, our objective at HRA is always to present realistic and viable scientific alternatives. In this case, like all, a number of alternatives to the usage of FCS do actually exist!

What can you do?

The Australian code for the care and use of animals for scientific purposes (8th edition 2013) states that “Methods that replace or partially replace the use of animals must be investigated, considered and. where applicable, implemented.” (7)

In summary, HRA believes strongly that researchers have a moral and a legal obligation to replace animals with alternatives when they are available. We feel it therefore makes sense to shift toward a more humane and scientifically valid methodology.