What is the Forced Swim Test?

The Forced Swim Test (FST) is a behavioural test conducted on animals in laboratories around the world, including Australia. It involves the dropping of a mouse or a rat into a beaker of water to observe its ability to swim, unable to escape. At first, animals panic and try to escape by attempting to climb up the sides of the beakers or even diving underwater in search of an exit. They paddle furiously, desperately trying to keep their heads above water, until eventually, they start to float.

The test is used to assess learned helplessness, which is a feature of depression-like behaviour in mice and rats. It is used in psychological studies and to test the efficacy of anti-depressant drugs. 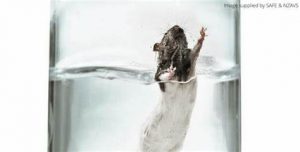 Footage of the FST can be viewed here.

Originally designed in the 1970s, this unscientific model is still used by some Australian universities today, including the University of Melbourne (Florey Institute of Neuroscience and Mental Health), Monash University, University of Western Australia and the University of Queensland. Examples of experiments are below.

Validity of the Test

The strength of the validity of the FST is now widely disputed. Instead of giving a true indication of mood or depression, the FST, in effect, really only records the time the animal takes to give up its struggle to swim to survive. Increasingly scientists themselves are divided about the correct interpretation of the results. Some claim that animals who spend more time floating are depressed, but experts reason that floating is more likely to be an indication that animals are learning, conserving energy, and adapting to a new environment.

Whilst depression is a chronic, relapsing disorder, the mood of of animal could change when the test in complete, and does not represent the human condition.  Immobility in animals may be prevented by a drug within 24 hours, whereas there is a therapeutic lag in humans, further evidence of the futility of the test.

A brief summary of some of the experiments in which mice have been required to undergo the forced Swim Test is set out below. Fortunately, four university animal ethics committees have already taken the enlightened step not to approve research using the forced swim test. Thank you to the University of Adelaide, University of South Australia, Macquarie University and Griffith University.

To study the mechanism of repetitive Transcranial Magnetic Stimulation for treatment of depression(1), researchers examined the behavioural changes in mice that had been fitted with an olfactory bulbectomy attached to the head. Behavioural effects were assessed in experiments including the Forced Swim Test. Another publication detailed use of a chronic restraint stress (CRS), the elevated maze test and the forced swim test protocol.

The Florey Institute of Neuroscience and Mental Health, (University of Melbourne)

For many years the Florey Institute has used mice and rats in various depression experiments. In one study researchers, noting that sex differences in humans are a prominent feature of the pathophysiology of psychiatric disorders, devised a study aimed at investigating the effects of ovariectomy and chronic 17β -estradiol treatment via a subcutaneous silastic implant on behaviours relevant to depression in adult female rats (2). Rats were observed attempting to keep swimming in the tube and were assessed for their behaviour.

In other experiments at the Florey Institute (3) environmental enrichment was reduced with the results of the experiment indicating that innate anxiety had no effect on depression like behavior in mice lacking serotonin transporter. Further, to study how paternal stress might influence anxiety and depressive phenotypes in offspring 4 mice were treated with oral corticosterone and their offspring were observed to be showing increased immobility time on the Forced Swim Test.

Although epidemiological studies indicate that advanced paternal age is associated with increased risk of health outcomes in offspring, including autism and schizophrenia, researchers have attempted to replicate the human studies by using young and old mice and their offspring (5). The young mice faced a battery of behavioural tests including the Forced Swim Test. In another experiment at the Queensland Brain Institute, researchers  used mice to study behavioural effects of Vitamin D deficiency, again employing the Forced Swim Test (6).

At Monash University researchers have been observing the impact of cannabinoid receptor 2 (CB2) stimulation on food intake, body weight and mood in mice that had been injected with CB2 and forced to become obese by way of diet and then subjected to the Forced Swim Test (7).

Many of these experiments were funded by Australian taxpayers by way of grants from the National Health and Medical Research Council, Australia’s prominent funding body for medical research.

View our video on the FST in Australia:

UPDATE: The University of South Australia and Macquarie Universities have stated that they will no longer permit the FST since release of the video.

HRA has joined with PETA in creating an e-action. Send your email to the universities continuing to use the FST here.

You can order FST campaign postcards and posters via our online shop.

Recent articles on the FST