At Queensland’s QIMR Berghofer Medical Research Institute, young female mice were forced to drink water that had been contaminated with microplastics (composed of polystyrene) for 4 weeks.

They were then infected with the arthritis-causing Chikungunya Virus (CHIKV) to study the effects of the contaminated water on the colon and in turn, inflammation. 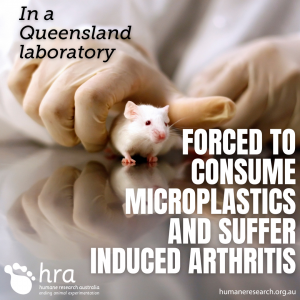 Although the research was undertaken to study microplastic contamination in humans and its effect in conjunction with a virus, namely the CHIKV, the researchers used a completely different species, namely the hapless mouse. And the conclusion was that (in mice) the contaminated water prolonged arthritis after infection with CHIKV believing disruptions in the colon activate lymphoid cells that amongst other things, migrate to joint tissue to promote inflammation.

It is already known that CHINKV causes painful joint inflammation and can cause headaches and other side effects. Of concern, the publication makes no mention as to whether any pain relief was given to the animals.

How can an animal ethics committee consider this to be “ethical”?

The researchers note the failings in their research stating “The microplastic doses clearly don’t recapitulate the size and shape or diversity in chemical composition of microplastics consumed by humans.” How can this research be considered to be “scientific”?

Therefore, HRA asks why this project was approved and why it funded by taxpayers (through the National Health & Medical Research Council, Grant App 11173880).

TAKE ACTION: Please sign our petition to the Minister for Health, the Hon Mark Butler, asking that non-animal methods of research be funded and not animal experiments.
Sign our petition.