When Australian Commonwealth Freedom of Information (FOI) legislation came into operation in 1982, and then later introduced into the states and territories, it was hailed as a basis for a more open relationship between government and the community. And indeed, it should have been. However, whilst any individual can request government-held information, FOI access is restricted by many exemptions and to balance the capacity of the agencies to which the FOI is requested, the workload generated to produce the documentation must not be such that it detracts unreasonably from the functioning of the core operations of that agency.

With these caveats in mind, Humane Research Australia (HRA) has discovered, after many years of lodging FOI applications to universities and Government agencies, success in accessing information is fraught with difficulty and a great deal of rejection.

FLAWS WITH THE SYSTEM

Defining what is in the public interest 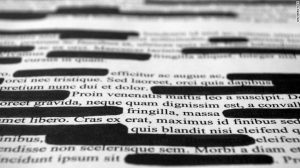 When deciding whether disclosing a document is against the public interest, an agency or minister must weigh up factors favouring access and those favouring non-disclosure. Factors in favour of access are set out in the FOI Act. They include whether giving access will promote:
• the aims of the FOI Act (such as the scrutiny of government, inform debate, promote oversight of government spending)
• public participation in government decision-making

However public interest is not a clearly defined concept and has been a long-debated discussion in relation to the law generally. However, it is certainly problematic in the area of freedom of information, and this is particularly so as the various state and territory FOI Acts do not uniformly define public interest. But it must be accepted that government agencies hold an obligation to act in the interest of us all.

Therefore, with no simple hard and fast rules available to decide exactly what sort of public interest arguments will be strong enough to outweigh those against disclosure, and a tendency to interpret very strictly what constitutes exempt material, major obstacles are encountered when attempting to gain access to documents. In most cases, a document may be deemed exempt either because its disclosure falls into a particular category of document (such as commercial-in-confidence) or because its release would have a particular effect (such as endangering lives by identifying people).

Obtaining documents, particularly in the area of advocacy in which HRA works, (seeking information about the use, funding and resourcing of animal experimentation in Australia) is fraught with difficulty. This is despite the fact that HRA constantly attempts, often through the appeal mechanisms, to seek disclosure in the public interest. HRA’s review of its FOI requests made since 2014 shows that the majority of applications were either only partially released or denied in full.

Of those denied, grounds for refusal have included papers being part of a deliberative process. For example, HRA’s request for documentation relating to Animal Ethics Committee (AEC) approval for a federally funded experiment, which was particularly cruel, were considered part of a deliberation and therefore denied. This exemption for deliberations could, we suspect, easily be misused since most of an AEC’s minutes and documentation could be qualified as “deliberations”.

Further, many applications were denied because they fell under the exemptions of commercial-in-confidence or denied on privacy grounds.

Take for example, a request to know what scientific institutes hold licences to experiment on animals. Whilst some states have, to some degree, released limited information, Victoria and NSW continue to keep a tight grip on this information. The Victorian precedent for exemption was set in 1989 (2) when applicant, Craig Binnie, applied for this information but was denied on the grounds that the release of information could “endanger lives…of relevant persons”. In 2015 HRA again applied for the information and again it was refused. Then as recently as 2019 HRA applied only for the names of institutes that use cats and dogs in experiments (which would inform campaigns and assist with rehoming of dogs and cats used in research) and again the documents were denied relying on the 1989 judgment that the release of information could “endanger lives…of relevant persons” (Section 31(1)(e) of the Victorian FOI Act 1982). This was despite HRA’s appeal which included, amongst other things, that documentation from research institutions in Victoria stated that no records of threats had been recorded and that HRA attempts to engage with researchers and rejects any violence.

Whilst commercial-in-confidence and/or trade secrets are often cited as grounds for refusing details of projects using animals, there is no clear determination on the definition of ‘commercial-in-confidence’ nor is there a process that is followed when this exemption is relied upon by government. HRA’s request this year to the National Health and Medical Research Council for details about an animal ethics committee (AEC) application relating to a taxpayer funded grant awarded to a university was denied under Section 34(4) of the Act as the project was deemed a ‘trade secret’. This is despite the fact that the title of the project, the researchers, the amount of funding was already available in the public arena. It is therefore impossible for the public to know what non animal methods of research, if any, were considered by the AEC prior to approval of the experiment. When federal government grants (taxpayer/public money) totalling billions of dollars a year, are awarded on the public’s behalf for the public’s improved health, the public surely has the right to know if the money was expended in the best possible way.

The cost of access to information precludes many people from accessing information. Fees include the application fee (which is applicable in most states) and although in some cases there is the option to apply for the waiving of fees, not all organisations qualify. Even if the application is successful, the hourly rates charged for processing the request and copying documents is often just simply too prohibitive for many to proceed.

The process can be very lengthy and take an inordinate amount of time. After starting the process with the initial application to the agency, it requires confirmation that it is indeed eligible. A prescribed time to respond is set down in the various Acts yet on many occasions the agency requests extensions of time, often to undertake third-party consultations. If an applicant appeals the final decision the review and appeal process is very lengthy. This prevents an applicant such as HRA from acting on a potential infringement in a timely manner. It also delays or thwarts the progress in preparing background information for a campaign.

A stark example of an inexcusable delay is as follows:

On 4th May 2020 HRA applied to a research institution for details in relation to the unintended death of a primate. After the agency’s requested extensions, refusal to release documents, appeals, an internal review and HRA’s application for an external review by the federal Office of the Australian Information Commissioner (OAIC), 2 years later to the date of the original application, the OAIC has finally, on 4th May 2022, notified HRA that an external review will be undertaken. At this stage exactly when is still unknown.

Not a true test of transparency

At a time when transparency in government is being debated, both in Australia and around the world, it is timely that HRA raises the question of transparency and failures of freedom of information legislation for the consumer. After all, human health and how it is progressed by way of medical science, is surely of interest to every individual? But what can we be permitted to know? What can we discover about how our taxpayer dollars, particularly on research and infrastructure, are spent and how can we be sure about accountability?

It is not only HRA finding the legislation frustrating. A 2019 article in the Guardian (3) noted that the refusal of FOI requests was at its highest level since records began in Australia, finding systemic problems with the system. The article notes that “academics, journalists, crossbenchers and anti-corruption campaigners are now calling for change, urging the government to overhaul Australia’s FOI laws to improve transparency”.

Limited information about the use of animals in experimentation is available in the public domain in Australia, which means we are heavily reliant on the FOI system. Unfortunately, HRA’s long journey through the difficult FOI maze over the past decades has given us very little confidence in transparency in government agencies or the university sector in Australia. HRA therefore joins many other organisations and individuals in calling for change, seeking an urgent overhaul of Australia’s FOI laws and greater transparency. For too long the public has been denied what the public has the right to know.