Fifty-one lambs were used in an experiment to study the effects of melatonin on newborn lambs suffering induced asphyxia.(1) 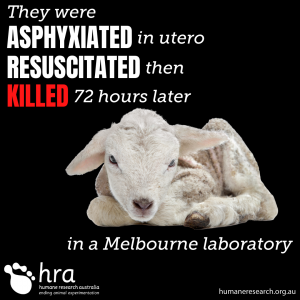 The experiment, published in 2018, was undertaken in Melbourne by staff from Hudson Institute of Medical Research, Monash University, Monash Health, and Murdoch Children’s Research Institute. It was funded by taxpayer’s dollars through the National Health and Medical Research Council.

The procedure:
While the lamb fetus remained in the uterine cavity, the umbilical cord was clamped to induce asphyxia. After delivery and resuscitation, melatonin was administered intravenously or by way of a patch. Some lambs demonstrated seizures after birth.
After 72 hours all lambs were killed, their brains removed and studied.
Two of the lambs did not survive the experimental period.

Perinatal asphyxia in babies is a cause of infant mortality but melatonin has already been studied in human newborns with perinatal asphyxia by researchers at the School of Medicine, University of Messina (Italy, 2001) with promising results with infants who received melatonin.(2)

HRA asks:
Why did lambs suffer when human studies had been undertaken decades before?
Why is there no mention of the ewes who gave birth to the 51 lambs?
What was the fate of these ewes?

What you can do.
To take action against cruel and outdated experiments such as these, please visit our web page.

Email the NHMRC asking that they stop funding unreliable methods of research such as this at   nhmrc@nhmrc.gov.au