This research investigates a neurological phenomenon called the attentional blink. Our attentional systems have difficulty being able to successfully recognise two similar stimuli if they are presented in rapid succession. This will make more sense if you look at a standard attentional blink test, which can be seen here:

It is thought that processing the first stimuli uses all of our attentional resources, which creates a momentary gap (between 200-500 milliseconds) in the processing of new visual information. The metaphor of a bottleneck has been used to explain this theory(1).

This phenomenon has been well documented in humans (3,4). The results of this research were similar to that of some other studies previously conducted in humans. This study also sought to discover the particular neurons in the brain that are associated with the attentional blink. This can be done in humans using an fMRI device, however the researchers suggest that the limitations in the temporal resolution of fMRI prevent researchers from being able to more precisely identify these neurons. Because of this limitation, the researchers used macaques so they could perform invasive brain monitoring and posthumous surgery.

All experiments and procedures were approved by the Uni­versity of Melbourne Animal Experimentation Ethics Com­mittee and conformed to the Australian Animal Welfare Act 1992 and the National Health and Medical Research Coun­cil Australian Code of Practice for the Care and Use of Ani­mals for Scientific Purposes. This research was supported by an Australian National Health and Medical Research Council Grant num­bers 454676 and 628668 ($556,250), and an Australian Postgraduate Award to one of the researchers.

Two male macaques had their heads fixated to make them focus on the stimuli and allow for recording. This type of fixation when performing neurological experiments is called the “halo method”, a circular aluminum frame encloses the entire scalp and is fixed to the skull using 6–8 stainless steel pegs. To record brain activity 2.5 mm diameter holes were drilled in the skull and electrodes were inserted. These procedures were performed under anesthetic.

The monkeys were then given a variation of the task described in the above youtube link. The one above in the youtube video is called a Rapid Serial Visual Presentation (RSVP) task. The task used in this study is called a delayed match-to-sample (DMS) task, which tests the same underlying process as the RSVP task. 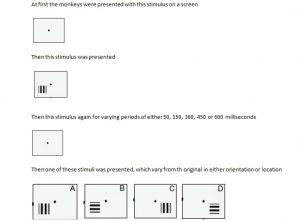 The monkeys had to release a lever to indicate whether the second grating stimulus was different from the first. To train them in this task, researchers would reward correct answers with a drop of fruit juice and a distinctive audio tone.This procedure was repeated, so that monkeys could be tested on all stimulus changes (A, B, C and D) and over all delay periods (50, 150, 300, 450 or 600 milliseconds). After this the monkeys were given a lethal injection of sodium pentobarbitone and their brains were sec­tioned and examined under a microscope.

What is not mentioned in the study, but is part of nearly all primate research in neurobiology, is a grueling and often long process of training a monkey to perform a task such as the one above. In training monkeys in this way, they spend long periods of time (sometimes up to eight hours a day) restrained to ensure they focus on the task. Often water is also denied to them during this process to ensure the appeal of the “reward”, in this case drops of fruit juice for completing the task.

Animal ethics committees in Australia are supposed to weigh up the suffering and loss of life of the animal with the benefits to society from the research. No contribution to any therapeutic advancement or beneficial knowledge is suggested in the study.

This research was justified as important because it may have discovered “single-neuron correlate of the attentional blink”. However reductionist approaches focusing on single neurons are very unlikely to be useful when extrapolating to the interactive nature of the operation of the entire human brain. Although this may be interesting, from a theoretical perspective, it has very little application in improving any sort of treatment or useful knowledge for humans as nerve cells work in conjunction with each other at the level of groups (clusters), columns or networks of cells and not on the level of the individual cell (5).

Instead of research using invasive procedures such as this, HRA recommends a battery of non-invasive brain-imaging and -recording techniques such as MRI, fMRI, EEG, PET, and CT. Intracranial EEG can be used to study the human brain down to the the level of a single neuron, which was one of the purposes of the research. Furthermore using these techniques on human participants removes the problems of extrapolating between species, which given the significant differences between the human and monkey brain, is an important consideration.

The large structural and functional differences between the macaque brain and the human brain, significantly limits the ability for extrapolation to humans (5). The macaque brain is not a scaled down version of the human brain, the brains of other primates are the unique result of millions of years of evolution in response to environmental, social and genetic influences. The picture below displays some of the significant differences between human and other mammal brains. 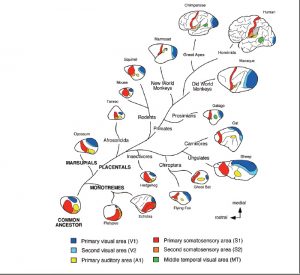 There are numerous differences in the anatomy of the brain between monkeys and humans (5).This study heavily involves the functioning of the visual systems, however this system differs considerably between macaques and humans. Humans have visual processing areas that do not exist in monkeys, and some visual areas in monkeys are over 3 times the size of those in humans. Furthermore, anatomically corresponding visual areas in monkeys and humans can perform very different functions (5). The area that performs a similar function (like in this study the neuronal correlate of the attentional blink), might be anatomically different in humans. This research is foundational; it might be useful in its own right to generate some new knowledge about mammalian neuropsychology, however it is very unlikely that studies of this sort will lead to successful treatments in humans.

Given these factors, HRA argues that the use of Macaques in this way is not justified. Fundamental research like this is totally the choice of the researcher and research institution.

Please use the form below to tell University of Melbourne how disappointed you are with their use of animals in this experiment. You can use the text provided or compose your own (remember personalised messages carry more weight).

Your message will be sent via email to the Vice-Chancellor.

3 – Temporary suppression of visual processing in an RSVP task: An attentional blink?

5 – Menache, A. (2010). The Replacement of Non Human Primates in Brain Research. Strasbourg: One Voice.