Latest figures reveal that over  11,000 dogs and 2500 cats were used in Australian experiments in 2017. At the conclusion of their “use” they are killed – even though they may be healthy. We believe that these animals should be given the opportunity to live out their lives – by being surrendered to a rescue group where they can undergo rehabilitation (if necessary) and adoption to a loving family. 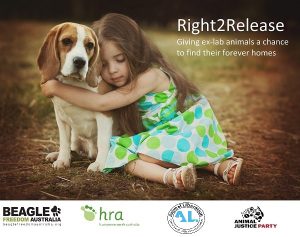 For this reason, we are working closely with Beagle Freedom Australia, the Animal Justice Party and Animal Liberation NSW to implement legislation to make this happen.

In 2013 the Australian code for the care and use of animals for scientific purposes was updated and the following clause was inserted: “Opportunities to rehome animals should be considered wherever possible, especially when the impact of the project or activity on the wellbeing of the animal has been minimal and their physiological condition and behavioural attributes indicate that they can be introduced to a new environment with minimal, transient impact on their wellbeing.”

The clause however, does not have any legal standing in that the Animal Ethics Committee need only consider rehoming. There is no legal requirement for them to do so.

The Beagle Freedom Bill has been passed in six states of the U.S. meaning that all tax-payer funded labs must offer their dogs and cats up for adoption through animal rescue organizations instead of just summarily killing (as is the standard operating procedure).

Help us make that happen here!

For this law to pass our Government needs to hear from you!

Current situation: Guidelines were issued in July 2018, thanks to the work of Beagle Freedom Australia, but will not be legally enforceable.
(Please still sign petition above if you live in Victoria)

Current situation: Prior to the SA state election in March 2018, HRA asked the Liberal Government “Would you legislate for the mandatory rehoming of ex laboratory animals (wherever possible) in order to strengthen the national code of practice which only suggests that rehoming should be considered?
They responded: “The State Liberals support the current national code of practice and would look at ways to further promote rehoming.”
We therefore await their advice on how they intend progressing this issue.
(Please still sign the petition if you live in South Australia)

Current situation: Minister for Agriculture, Alannah MacTiernan, has advised us that “I am prepared to support a joint approach to seek a specific review into this matter of rehoming and have requested the Department of Primary Industries and Regional Development make contact with your organisation and the RSPCA accordingly. If a practical proposal could be developed for consideration by jurisdictions, this Government would be prepared to support a relevant amendment of the Code”
HRA will of course pursue this avenue, but as the code review is a long and onerous process, we have requested that in the interim, WA implement a bill, or at the very least, guidelines to assist animal ethics committees with rehoming.
(Please still sign the petition if you live in Western Australia)