A recent (2021) publication reveals invasive experiments on young male rats carried out at the University of Newcastle, NSW in an attempt to replicate human stroke conditions and test levels of hypothermia, prior to re-establishing blood flow.

During this invasive experiment the rats had a cannula inserted into the femoral artery to monitor blood pressure and heart rate. 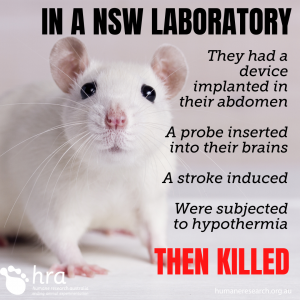 To monitor body temperature, a data logger device was then implanted via an incision in the right abdominal region with forceps being used to create a pocket under the skin that was large enough to hold the device. Cranial surgery was then performed where a probe was inserted into the brain. The rat’s head was held secure in a stereotaxic frame, with ear-bars inserted to hold the animal still whilst drilling into the skull until it cracked, using forceps to remove the skull.

A stroke was then induced by way of a suture with a silicone tip being inserted into the carotid artery until it was blocked. The rats were then tested for stroke-induced neurological deficits.

After the induced stroke animals were subjected to different levels of hypothermia for 60 minutes. At the conclusion, they were killed and their brains studied.

Despite decades of research using animals to develop pharmaceutical treatments for patients who have had a stroke, few therapeutic options exist. The vast majority of interventions successful in preclinical animal studies have turned out to have no efficacy in humans, or to be harmful to humans.   So why does this research continue? A recent publication based on an analysis of opinion papers explored this question.  Efforts to make the failing animal model paradigm ‘work’ despite the history of its failing seem misplaced. The publication discusses a theory that when confronted with anomalies within a paradigm, scientists tend not to renounce that paradigm but attempt to modify their theory instead.  Beliefs and practices continue in the face of contradictory evidence, perpetuated by entrenched practices, institutional lock-in and supportive frameworks for animal research.