Researchers at the University of Western Australia aimed to “test the effect of CGA [phenolic acid in coffee] on high-fat-diet-induced obesity, glucose intolerance, and insulin resistance in mice.”

Thirty male mice were maintained on a normal diet until 7 weeks of age. They were then divided into three groups and fed different diets – normal, high fat and high fat containing CGA – for a further 12 weeks.

Throughout the study, body weights were measured weekly, and blood samples taken. Food was withdrawn from the mice 5 hours prior to the testing, the mice were given an intraperitoneal injection (into the abdomen) of glucose and blood obtained by tail bleeding.(See http://www.nc3rs.org.uk/bloodsamplingmicrosite/page.asp?id=339)

At the end of the study, mice were fasted for five hours prior to killing. Fasting blood samples were collected via cardiac puncture. It is not clear from the research paper whether the mice were still alive during this procedure.

Note, the video footage is not of the actual experiment but is indicative of the procedures described in the experiment.

The experiment was publicly funded by way of an Australian Research Council Linkage Grant LP0882884.

The authors state that the results from the experiment were not consistent with a previous study (Chlorogenic acid exhibits anti obesity propertyand improved lipid metabolism in high-fat diet-induced-obese mice. Cho et al,2010). They explain that variation is due to a difference in dosage and a different a different strain of mice being used. 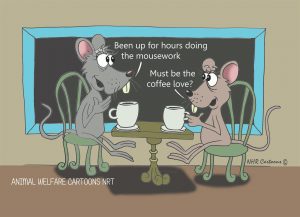 If results differ between strains of mice, HRA questions whether it will also differ when applied to humans!

The researchers suggest that future studies are vital as this study failed to collect feces from the mice which is important to compare the microbiota and also state “[f]urther work especially on human intervention studies is required to determine if coffee polyphenols are able to protect against metabolic syndrome and type 2 diabetes in humans. ” (Our emphasis).

HRA Letter to the Editor:

What an utter waste of resources (“Scientists find link between too much coffee and weight gain” 29/5).

The Western Australian study has shown that more than six cups of coffee a day can lead to weight gain, greater glucose intolerance and increased insulin resistance. The problem is however that this data has been obtained by feeding coffee compound to obese mice. Now that could be very worthwhile research – if you’re a mouse – however I have not seen many mice sipping lattes at my local coffee shop of late.

A mouse has a different anatomy, genetic make up and metabolism than a human, so any data obtained from this study cannot be extrapolated to humans with sufficient accuracy. Surely there are some obese people in our society who drink coffee. Perhaps if the researchers focused on observing their dietary habits they would obtain more meaningful data which could actually assist with HUMAN medical research.

What you can do

Please use the form below to write to the funding body asking that they stop wasting valuable taxpayer dollars on research that is irrelevant to human health. You can use the text provided or compose your own.

Use the text below or change it to compose your own message.